We have had two industrial revolutions so far. The first was in the late 18th century; while the second started in the early 20th century, when Henry Ford ushered in the age of mass production, and has lasted over a century until the present day.

Now at last, a third industrial revolution is happening at breakneck speed — manufacturing is going digital.

New technologies are emerging (notably 3D printing) and now you can have your car in any color you like — not only black, despite what Ford famously said.

Labour costs are shrinking: a $699 iPhone 5 entails only $8 of assembly costs, out of an already small 35% of total manufacturing costs.
And since companies now want to be closer to their customers, factories are moving back home.

3D printing is flooding into the consumer space, transforming each customer in a miniature production plant.

But that’s not all yet. Digital manufacturing’s most famous rib, 3D printing, is flooding into the consumer space, transforming each customer in a miniature production plant.
That’s what’s called distributed manufacturing.

It’s not often that a company gets start its business by giving away its intellectual property and encouraging customers to manufacture the company’s products themselves. But that’s exactly what many companies are doing right now, like AtFAB and 3DRacers (note: I’m the founder).

This is possible thanks to a growing networks of FabLabs and printing networks like 3DHubs, that have made digital manufacturing accessible to the public at large: even customers without a 3D printer can have their product made by the nearest hub or FabLab. And with more than 10,000 printing hubs worldwide, you shouldn’t have any problem finding one.

Better still, since you can just send your files away and have your product manufactured, even the smallest indie hardware company can reach the market easily, and without huge upfront costs. 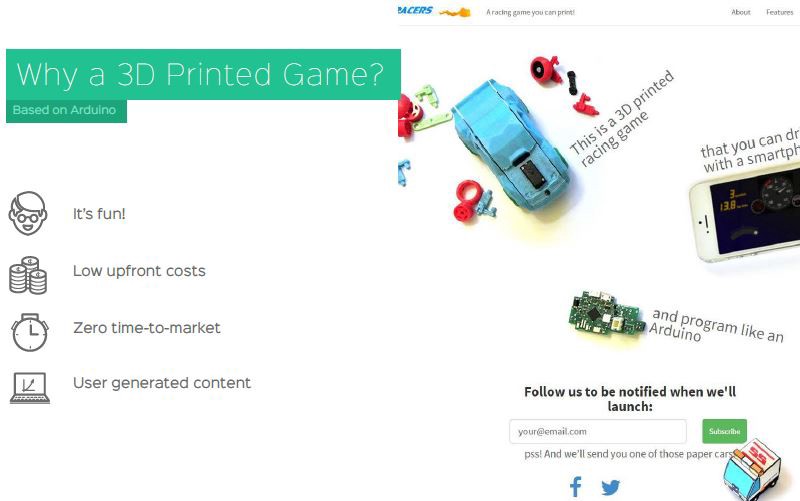 Obviously this approach can have its own share of problems too, but it also allows even more possibilities: downloadable design; zero turnaround time from design to production; user-generated content; and a generally leaner and easier approach to product design.

The customer is in charge of the production, and can even become the designer.

The customer is in charge of the production, and can even become the designer, driving a positive feedback loop that can lead to a new wave of innovation, akin to the one from the IT and the start-up world.

Manufacturing is no longer a job with lots of paperwork, agreements, and supply-chain issues, but a much more thrilling and open opportunity.

3DRacers will launch on Indiegogo on February 2nd, subscribe for early bird.